By now you may already know that I’m attracted by mountains, so it should come at no surprise that I looked at Ruapehu a few times and thought: “Why the hell not?” While it has been a few months already, here’s a little insight into the climb of Tongariro National Park’s uncrowned king. As it turned out, it is much easier than Mt Ngauruhoe (known as “Mt Doom” from Lord of the Rings – more on this beast another time) and well worth the effort.

Mt Ruapehu is not only the highest mountain of NZ’s North Island, but also the highest volcano in the country, with only its “brothers” Tongariro/Ngauruhoe and Mt Taranaki coming close. While I deemed it initially too difficult/dangerous when first coming to Aotearoa, I was reading about people going up with relative ease, being mentioned in hiking guides (not mountaineering guides) and whatnot, so early this year I figured it can’t be that hard after all given I’ve done Taranaki three years ago.

So off I went on a sunny Saturday in late February – with Albert from Spain, who I’ve made contact with via Couchsurfing and told him last minute on Friday night that I’d be going up. He was cool and so we drove the two-odd hours to Whakapapa, a village that mainly serves domestic and international tourists wanting to ski down Ruapehu’s slopes, hike the Mars-like landscape of the National Park and staying at the “Chateau Tongariro”, a posh old-school hotel that’s probably the reason why Whakapapa exists in the first place.

Being “Adventure Smart” as touted by DOC and other tourism organisations in New Zealand, we headed straight to the Visitor Centre to enquire about the climb. Two days before I had rung the very same centre already and a lady referred me to “Ruapehu Ski Lifts”, the company which runs the – surprise – ski lifts up to a lower section of the mountain. She said “they decide who can go up and who can’t”. Given my previous experiences with DOC, tramping tracks, etc. that struck me as very odd. “Oh well”, I thought, and rang them up. After my question whether they reckoned it’s safe to go up on Saturday and whether there was a lot of snow, the friendly lady simply replied: “No, you won’t have any problems at all, in fact there were several people who climbed up the crater today!” Sweet as mate!

The guy who staffed the counter at the Visitor Centre was nice enough, but had no understanding when I mentioned the phone call I made two days earlier. “You don’t sound very convincing to me.” was the second thing he said after I said we want to go up and that I had previous experience with Taranaki and the like. “

“Do you have crampons and ice axe? As you can see there’s a lot of snow up there.”

Ehm, I did see the snow, yes. But surely this doesn’t mean we need specialist winter gear for enjoying the top? It’s summer after all!

“You shouldn’t go up. You could try by avoiding the snow, but it’d be better if you choose something else. What about a walk around…”

I mean, I get it – there’s no shortage of people (read: tourists) that lack any common sense and do the Tongariro Crossing in sneakers, crocs or even jandals…I’ve seen it all, and I know DOC tries to prevent these people from going where they want to go and thus they probably do help avoiding lost, injured or dead visitors.

But here are we, two young Europeans who wear outdoor clothing and hiking boots, ready to tackle the mountain. I agreed to buy a topographic map (this was my plan anyway) as the way up is not straightforward, and I would do well honing my map reading skills; after all navigating by a topographic map is fairly different from reading a road atlas. We headed straight to the ski lifts as they save you about two hours climbing – since the actual climb is pretty much the same all the way up (a massive volcano rock scree), it wouldn’t hurt to shorten it and have more time to enjoy the actual summit. 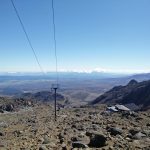 Looking down to where the ski lift stops in summer 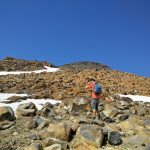 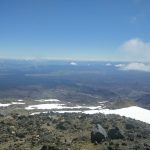 After getting a tip from one of the ski lift employee which route to take (it was difficult to make out, but there), the first hour was pretty easy as you have the remaining ski lift poles guiding your way. And I mean, how hard can it be to go up a mountain?

As it turns out, more difficult than you would think. While the backdrop is a stunning view over the National Park, it’s fairly difficult to know in which direction one has to ascend in order to reach the summit – at some point it’s just all ridges and rocks with no other visible features. It was good we had the map, as we knew we had to stay left of the glacier, but hitting the right “gate” between the domes was a bit more difficult. Luckily for us, we saw at least eight other brave trampers making their way up (none of them had crampons…), and after some careful testing we even crossed two snow fields, following the steps of others as it was a faster way.

I can’t remember the exact duration but I think it took us something like three hours up from the café where the ski lifts end in summer. The views were astonishing, as was the crater lake on top. Going down was easy, and this time we managed to find a route that didn’t have any snow at all! Not sure how we missed when going up, but like I said, it’s all scree and there are no poles or anything else to guide you. 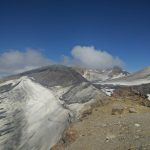 The narrow path to Ruapehu’s crater 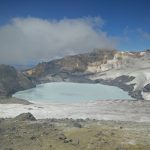 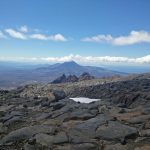 Mt Doom looming in the distance

Another word of warning: On the way down we had to stop a few times to make sure were descending in the right direction. Under no circumstances would I try this in bad weather, as chances of getting lost increase thousandfold. If it’s a nice day though and no clouds are expected (check the weather forecast), I would say this is almost a must-do for anybody who’s remotely keen to climb mountains and take in breathtaking vistas. Not to speak of the fact that you can claim yourself to have bagged the highest volcano in NZ!

Thank you for reading – until next time.