It’s strange. Would you, if you already live on a remote island, sit in your living room and think the following: “There’s this even more remote island which is not even connected to the national power grid, let’s go!!!” Well, I did.

If you ask Kiwis about Great Barrier Island, you might get a comment like “Is this by the Great Barrier Reef? Nah, haven’t been!” (In fact I did get something similar). This even seems to be true for Aucklanders, despite possessing the easiest access to NZ’s sixth biggest island. I was curious about the place, and, of course, had eyed with the Aotea Track – a tramping track that crosses the island’s highest mountain Hirakimata (also called Mt Hobson) – before when browsing the DOC website. It appears pretty overlooked: Most visitors I encountered were from Auckland, and only more intrepid backpackers make their way here while travelling Aotearoa.

Is it a hidden gem? Read on to find out!

The flight alone is almost worth making the trip, as the domestic airlines connecting the Barrier (as the locals call it) use 10-seater planes exclusively, which, unbeknownst to me prior to the trip, fly pretty low compared to their bigger counterparts. “Pretty low” means about, say, two kilometres maybe? Either way, on a fine day the views are spectacular to say the least; it’s like having your private charter flight – only that it’s cheaper and longer!

Half an hour after departure from Auckland Airport, I landed at Claris Airfield, which is roughly located at the Eastern centre of the island. Claris itself is the administrative centre and features small shops and cafes, tourism companies, the regional council office and other such things. Most, if not all buildings used by humans on the island seem to be equipped with diesel generators and or/solar panels, so it’s easy to forget how far away from civilisation one actually is. 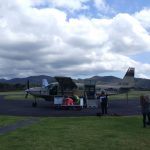 One of Barrier Air’s 10-seater planes 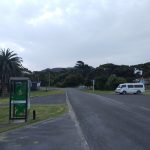 After arrival I made my way straight to “the crossroads”, the only major intersection on the island with roads going in four different directions, to hopefully hitch a ride to a little car park past Okiwi (a settlement close to the island’s rarely used second airstrip), where Cooper’s Castle track begins – the first section of my two-day tramp. I’d read before that hitching on the Barrier shouldn’t prove difficult, and sure enough, after about ten minutes at the crossroads a police ute stopped – one of the two police officers of the island gave me a ride (thank you again!). The Barrier’s roads are “Kiwi Classics”: Narrow, almost always going uphill or downhill, and windy as – but mostly tar sealed, so it’s all good. It took about 45 minutes for us to reach my destination, and off I went.

It’s nice to see that the Barrier’s forest, at least in the mountainous area in the island’s centre, is somewhat “different” from the typical NZ forest, but not by much. No markers where to be seen anywhere however the track was easy to discern, and since you’re walking along a ridge after a while, it’d be difficult to get lost. After two hours of medium difficulty walking I reached the “castle”, which has a fine lookout over the North of the Barrier – and a steep drop off. Care required! What followed was something that must have been a huge slip at some point, and DOC decided to lead the track straight down on it. DOC’s poles were not easy to find, there are deep mud clay holes hidden beneath high grass and it’s fairly steep, so this was by far the most straining part of the trip; the annoying terrain fortunately only last for 15 minutes, if that. 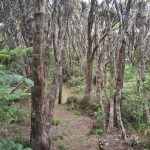 Typical forest in the mountainous areas… 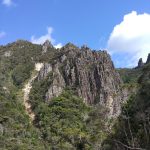 Soon I reached the track junction joining the Kaiaraara Track which is part of the “actual” Aotea Track and almost at Great Walk standard: I was surprised by even gravel rather than roots and mud! I could see Mt Hobson pretty much right in front of me, and it should have made me think, since the hut was supposed to be another two to three hours away. But I didn’t think, nor did I check the contour lines on the topomap I had printed for this trip. It didn’t take long for me to encounter the first stairs. Steps are fine, no need to struggle up the rocks, and sit down and have break whenever you like. The only problem was: They didn’t end. These bloody stairs went on for more than an hour, and I estimate well over 1500 individual steps, built up all the way from the valley to the summit of Mt Hobson…holy moly! Even the Hakarimata Summit Track near Hamilton cannot compete with this. Fortunately, and I’m glad I can say this most of the time when exploring NZ’s nature: It was absolutely worth the sweat.

It got even better when I reached Mt Heale Hut, officially now awarded with the Unter Kiwis Platinum Medal For Awesomeness™. This was the single best hut I’ve encountered in this country so far: Clean, modern, gas cookers and pots (!), solar lighting (!!) as well as a view over the island’s west coast with sunset besides Little Barrier Island (!!!), WITHOUT sandflies (!!!111oneeleven). Really, you can’t ask for more. Throw in some nice company in the form of a young British-Kiwi couple from Auckland and some Kiwis ladies from Christchurch, and you’ve got everything you need for a nice social evening in a beautiful spot of Planet Earth. You can guess that I’ll recommend you to go, eh? 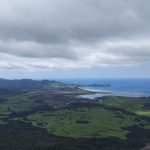 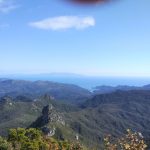 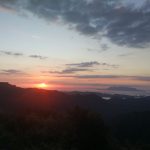 Sunset at the Barrier, seen from Mt Heale Hut

The next day was hazy and the views not as good as the day before, but I was not too fussed and descended quickly towards Whangaparapara Road, via Kaitoke Hot Springs, the latter being a highlight of many visitors. Being based in Rotorua and given the fact that it was a bloody humid day, the decision to forego bathing in the hot water was easily made. From the road it wasn’t far to the Crossroads Lodge, a rusty backpackers opened by Bruce and Katie about 17 years ago. The bunk rooms are basic however it has a good location, lovely hosts and you meet other travellers, I quite enjoyed my stay there. Thanks to Katie I was able to cruise around on her mountain bike, which allowed me to explore more of the Barrier at my own pace.

On the remaining days I went for a swim at Okupu, kayaked Whangaparara Harbour, biked to Kaitoke Beach and climbed Te Ahumata, a smaller mountain in between the roads to Whangaparapara and Okupu. It’s definitely the place to be if you want scenery like on Coromandel, but without the people – or nice scenery without people in general. Little background fact at this point: Great Barrier Island used to be part of the Coromandel, which you can see from the Barrier’s mountains looking South East, but was split off a couple of thousand years ago.

It was a cool little trip – I’m not sure why but I’m somehow drawn to these little islands…that’ll probably change once I embark to my big trip next year, but we’ll see. After all that one starts out with some islands too. I can see myself going back to the Barrier one day, maybe renting a car this time and going to the more far-flung places such as Harataonga Bay or Cape Barrier which are difficult to hitchhike to. Of course the landscapes are not everything: Every day I just woke up when I felt like it – no alarm, no looking at the watch for that matter, I hardly ever did on these four days. You can feel time passes slower here than on the mainland, people are friendly and not worried whatsoever as houses and cars stay unlocked all day. It’s a bit of a world on its own; one I’d encourage you to have a look at.

This is my last post before New Year’s Eve, so may you all have a good start into 2018!