There are certainly countless amazing regions throughout NZ, depending on what you’re looking for. Except for Eastern Canterbury, I was keen to see each area of the South Island, and one of the most intriguing destinations I’ve read about prior to travelling there was the West Coast.

West Coast, you ask? No, not the one known for LA and San Francisco, but the one where rain is the dominant form of weather throughout the year. Nevertheless people go there all the time, often as part of a round trip, either going down this route, moving east in Southland and going back up, usually to Christchurch, or the other way round. Back to the rain: This area sees everything from approx. 3200 mm up to figures exceeding 6000 mm of water annually, which is W-E-T (yet I didn’t make one of the various lists online on the wettest places on Earth). Don’t let that put you off, as there are some real gems to be found here (actual and non-physical ones!); I haven’t seen half as much as I want to see but at least have been to an old mining post called Denniston as well as the Oparara Basin, a fascinating limestone basin on the edge of Kahurangi National Park – come have a look!

A little bit more background information: This difficult climate is the reason for a population of around 30,000 people, with the biggest town Greymouth merely housing one third of them. The “Coasters” mainly work in the mining, forestry and dairy industry, although tourism is strong with the famous Franz Josef and Fox Glaciers as well as other minor attractions such as the Pancake Rocks being located here. Similar to the North Island’s East Coast, although not as bad, standard amenities are harder to find here, especially when travelling down to Western Otago: For a start, there is no Pak ‘n Save until arriving in Invercargill! If you’re using a car, petrol won’t be cheap here either due to the remoteness of the area; supplies are readily available in Westport, Greymouth and Hokitika, but in between and beyond, you will spend more money than you might have done before, so stock up in either of the three towns.

My mate and me actually were still based in Motueka at this time, but we used a few days off to hike the Heaphy Track and decided to start at the West Coast end. We knew we had a bit of spare time, so we first ventured to St Arnaud, a tiny settlement on the border of the Nelson Lakes National Park – a criminally underrated national park which I perceived to be overlooked by most tourists. Unfortunately we only had a day so we decided to go for a half-day walk in best weather, and no one else around save for two Israeli girls who did a similar track cutting ours at some point; you can see one photo from the track below. Highly recommended! After a short stop in Westport one day later, we proceeded to the sleepy town of Waimangaroa, and turned off up the hill to the (virtually) ghost town of Denniston. Once being built to serve a large coal mine, it is now sort of an open air museum with few people around. Lots of big signs tell about the history and the town’s destiny – there’s also a ride on an old mining train (?) which was not operating when we arrived. Unfortunately the walkway to the actual mine entrance was closed with just a sign saying “Track closed. Do not proceed, danger of life” which made me curious and I proceeded anyway. Just 5 minutes down the track was another sign saying something like “DANGER, DO NOT PROCEED. Explosives used in this area” and well, that was the time to turn around. Too bad. The most impressive thing about the facility however is the Denniston incline, which used to deliver the coal from the plateau the town sits on some 500 m downwards to the shoreline, with a length of approx. 1.5 km. Given that this was built and operational in the late 19th century, it’s pretty impressive! We only saw three other people around which makes Denniston an interesting side trip if you’re happening travelling to Karamea and are interest in this part of NZ’s history. 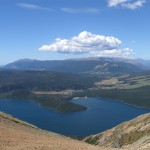 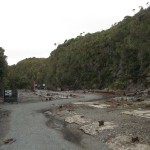 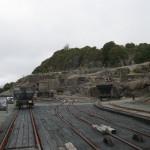 Loading site for the coal before it went down the incline 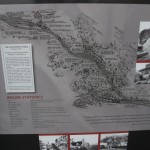 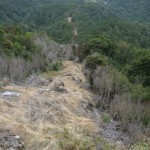 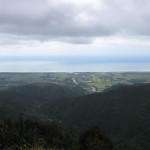 Waimangaroa and the coastline seen from the plateau Denniston sits on

Karamea, a town which consists of three roads, feels like the end of the world after a one and a half hour’s drive, most of it being gravel road (March 2014). It wasn’t the best weather either when we arrived so it felt dead and dull. From here it’s another 30 km into the heart of this extraordinary environment called Oparara Basin. We had a day for this again and decided to do the short walks available as well as look into the caves. Escape the car parks as soon as possible as they feature massive amounts of sandflies (or bring heaps of insect repellent). As it’s hard to describe the basin adequately, I will let a few photos speak instead of me – definitely worth a trip for the nature lovers outside and a bit off the beaten track, although there were quite a few people around. Guided tours and transport are available and start in Karamea for those who don’t own a car. 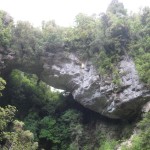 Strong and old: A limestone arc formed millions of years ago 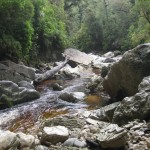 A river flowing through the limestone caves 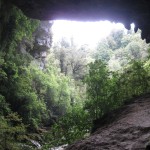 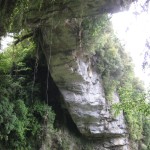 Lianes hanging down the limestone. Only monkeys are missing! 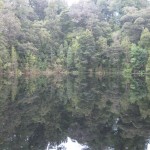 Mirror Tarn, a small lake who definitely deserves its name 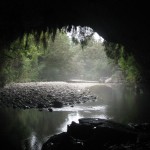 Below one of the limestone arcs. There are caves on the right hand side

Have you been to either of those places or the region in general? Let me know what I’ve missed so I can go back!