Volcanoes. There’s certainly no lack of them in New Zealand, especially in what’s called the Taupo Volcanic Zone: A vast area which encompasses most of the Bay of Plenty and serves as my playground on many weekends for quite a while now. Fortunately for me and many Kiwis, most of these volcanoes are dormant, leaving mountains with interesting shapes, landscapes and histories behind (although it would be amazing to climb an active one – yes, I know it’s nuts, but adventure is the spice of life!). A few weeks ago I made my way up to Mount Tarawera, semi-famous for destroying the Pink and White Terraces in the 19th century and giving the name to the eponymous waterfalls and lake in the area. Calling the view from the summit spectacular is almost an understatement! 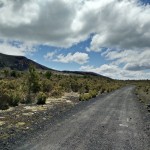 The old gravel road to the crater 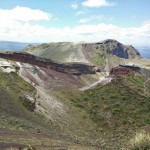 The crater area from afar 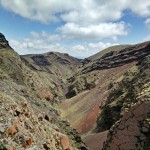 The eruption over 100 years ago created bizarre shapes

Mt Tarawera lies roughly 25 km southeast of Rotorua and is only accessible by driving on some country roads, passing nothing than farms – it’s a good 30 minutes drive without any hassle. Well, the actual hassle presents itself by searching for information on where and how to climb this monument: There is almost none, and further investigation reveals that’s because one of the local iwi (= Māori tribe) owns the land, and they closed independent public access just a few years ago. Now the only way up is taking a guided hiking tour (at a steep price of $149) which includes a four wheel drive up to the crater carpark…or being friends with someone who belong to the local iwi, I was fortunate enough to be such a person! Due to time reasons and a fairly late arrival at Lake Rerewhakaaitu – which features a beautiful, cheap and to tourists relatively unknown DOC campsite, by the way –, I didn’t walk into the crater, which is also possible. 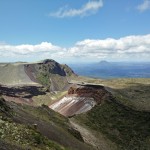 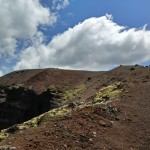 A red-brown ash/soil mix leads the way up

Lake Tarawera from the summit

There is apparently no other way than the gravel road up to the crater, but a local Māori family on whose horse farm I’ve ended up first claimed that there is another way heading towards the mountain when coming from Ashpit Rd, but I didn’t proceed further into the farmland. Unlike the Tongariro Crossing, of which Tarawera is the small version in my opinion, you won’t encounter tourist masses for obvious reasons. Should money not be an issue for you, it’s well worth going up – your call. Look at my photos to make your mind up, and leave a comment should you have any questions!