It’s time to have a look at one of THE destinations in New Zealand: Magical, annoying, stunning, crowded and love-hated Queenstown (which I will abbreviate as QT).

In the past, this wasn’t more than a sleepy settlement in the middle of nowhere and with the exception of a few years of gold mining, QT never got much attention by people until the middle of the 20th century. 50 years later it’s a madhouse and labels itself “adventure capital of the world”, which might very well be true given the myriad of activities it offers…let’s get into it.

A car accident got me stranded in QT for almost two months – given that I only suffered minor injuries, someone I work with exclaimed with a smirk: “Oh, you must have been really disappointed having to stay in Queenstown for longer!” Well…not so fast, Sherlock. Certainly, this is heaven for party goers with money to spend, or let’s say people in general with money to spend, the problem was: I had a finite and not extraordinarily big amount of money, neither a car nor income at this time…yet I made a fair lot out of it.

Coming from Wanaka over the Crown Range, which is said to offer amazing views over the QT area on its last bit travelling south, was disappointing as it was covered in heavy fog. Being a dull day at the same time, I was fairly underwhelmed when approaching the “Holy Grail of NZ Backpacking”. What did I expect? The town sports a decent, growing population of 12000, but arriving in the “city centre” just feels like arriving in yet another mountain village, albeit with a larger amount of people around. Granted, the accident hadn’t left me in a particularly good mood so that’s likely why I felt this way.

The next days allowed me to experience and gain some understanding of the hype surrounding the place: The town centre is crowded with tourists, as expected. And I mean REALLY crowded. It gets worse when going to the main supermarket (which is a Four Square in disguise) or the Skyline Gondola – not surprising, as it’s a another level compared to other “touristy” towns such as Rotorua (whose city centre’s roads of interest to tourists are barely more than the ones that make up QT’s centre). Keeping Rotorua as comparison, one also notices how most buildings and roads look really neat, modern and clean – a strong contrast to many other less fortunate rural towns, especially in the North Island. The amount of bars and pubs is staggering, and many people working in retail and tourism are not from New Zealand, let alone Otago.

One or two days at a maximum are more than enough to get to know every street and aisle, and that’s when I asked myself what I could actually do while not spending hundreds of dollars of cool activities (there’s no need for me to give you a list of activities here, there’s plenty to be found on the internet) I wouldn’t even be able to enjoy fully. Fortunately, for a passionate hiker (NZ English: tramper) like me, it’s not too hard to find some joy in a town that’s surrounded by the Southern Alps. Asking around and looking at brochures recommends Queenstown Hill (aside from the Skyline Gondola top) for a lovely look over the area. The way up is straight forward, fairly short and the view turns out not being too spectacular, so I looked for something else. With all these magnificent peaks, there must be one whose peak one can climb for a truly amazing view? Certainly: The Ben Lomond. 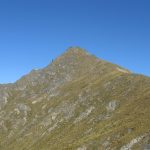 The summit of Ben Lomond, after 3 hrs of tramping 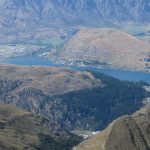 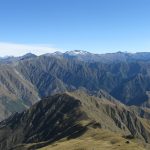 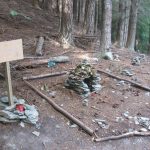 A fairy home on the way up the summit – don’t wake them up!

This is not really a secret, but likely one of the greatest day trips (assuming good weather) in QT that you can start on the doorstep of your accommodation – all for free. Ambitious people can progress even further when the track branches off north and becomes the Moonlight Track, all the way up to Arthurs Point: A little mountain settlement on the road from QT to Arrowtown. Be aware that this is takes 5+ hours, but one possibility would be booking an Onsen (Japanese-style spa pool) at Onsen Hot Pools, which can include a transfer back to QT. Back to Ben Lomond: It took me a good 3 ½ – 4 hours to the summit, and about 3 hours to get down again (if you’re as sporty as the two Kiwi blokes who I met running up the mountain, you might make it in four hours total!). I even skipped the gondola and started walking up from Brecon Street, from there it only takes about 20 minutes to the gondola top.

Most people visiting QT have heard of Fergburger before they arrive, as they have a reputation of being among NZ’s best “gourmet burgers” – which I would agree with. My opinion might be influenced by the fact that I was hungry and that I only had to wait for 10 minutes when first ordering a burger, as I actually managed to arrive at a time when only a handful of people were waiting for their food. At other times, waiting times of up to one hour are not uncommon, so prepare to wait or entertain yourself with your friends (and other people waiting in line).

A lot of backpackers, but also other people including Kiwis from different parts of the country, try to stay in QT for a longer period if they can afford it – having this constant influx of tourists also provides for quite a few auto, electrical and construction related businesses, a little library, a clinic and of course the international airport with all its commercial activities. I can understand the attraction this builds, but would rather live in more low-key Wanaka, which has more charm left as there are fewer crowds (although this is changing) and can offer equally stunning scenery.

No matter what you’re after, QT got you covered in the end, and I’m sure you’ll have your share of fun if you visit. Don’t just come solely for the party!