Sometimes one doesn’t have to venture far off the beaten path to find a real gem – this is especially true in New Zealand, no matter if North Island or South Island. “The beaten path” I will start this post with today are the Waitomo Glowworm Caves, which are about one hour drive from Hamilton, that rather soulless city in the Northwest of the Waikato.

Being on most NZ tourist itineraries, virtually everybody has done “blackwater rafting” or a related activity with one of the many tour operators that own licenses to go into the caves. Yes, I’ve done it too, and don’t get me wrong: It’s a cool activity and often a highlight for many of Aotearoa’s visitors. Very few of these tourists though wonder where the road that continues past the big visitor centre leads to: Te Anga Road can bring you all the way to the coast, and it’s a really nice drive scenery-wise, albeit very windy and narrow, like so many of NZ’s backcountry roads. It also allows you to reach the destination I present to you today: The beautiful Tawarau Forest.

This is one of the few places where I went to two times within a short period – in July 2016 and later in October again. Yes, I even had good weather in July: It was a cool, but sunny day and I went all the way to Speedies Rd (which is close to the settlement Te Anga) to try my luck with the Gorge Track, one of the three tracks pushing its way through the dense forest. Already interesting to start with, the farmland I had to traverse is located in the wide beginning of the eponymous gorge, featuring interesting limestone formations all around you.

Finding the right way however was a struggle. I couldn’t find any markers, so I was wondering whether this was another instance of “she’ll be alright” mentality, as in: You don’t need markers to find the right track? The track was meant to go through a forest along a river, but with making two wrong choices when choosing the path, it took me more than one a half hours to find the entrance to the forest, which had a massive fallen tree blocking the way…somebody cut a “tunnel” through it in order to proceed! Having arrived at Speedies Rd fairly late, and almost getting lost two times on the heavily overgrown track, I decided to turn around. Only on my return to the car I finally found the previously missing markers: Someone has removed them all from the ground and laid them down in the grass. It really wasn’t meant to be on that day! At least I found two other things worth the trip on my drive towards Waitomo Caves Village: Marokopa Falls and a huge limestone arc, leftover from a collapsed ancient cave system. 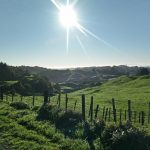 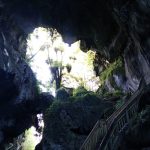 The exit of the limestone arc 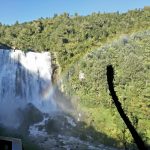 Three months later, the next opportunity came up, with the weather forecast not really being in our favour (this time I went with a friend) – nevertheless we went, and sunshine awaited us upon arrival! I had decided not to try the Gorge Track again but instead to opt for the, based on its description, more interesting Tawarau Falls Loop Track. It proved more beautiful right from the start and was fairly easy to walk, with some amazing parts, among them a passage were water flows out from a super-narrow rock hole and a limestone “plateau” with natural pools and mini-caves. Unfortunately I didn’t read the track description properly since you are supposed to cross the river three times…in the end we finished the track without getting wet by the river once. 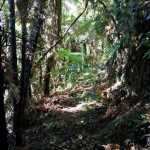 Yes, this is Gorge Track 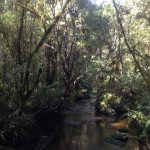 Tawarau River, flowing through the forest besides the tramping track 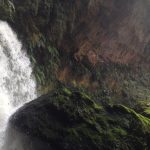 The perfect picnic spot in front of Tawarau Falls

How? Well, we straight out ignored the first crossing – not realising we were supposed to cross the river – and accidently followed a difficult DOC ranger track through the bush, and subsequently lost this track too. Fortunately my mate had his mountain bike GPS with him, which allowed us to return to the track fairly quickly. Unbeknownst to us, we had skipped two out of the three river crossings that track involved, with the third one coming up shortly after we were back on track. And guess what? A bunch of trees as well as other big plants had grown across river (likely with some human help), and it was stable and wide enough to cross! This was fortunate as the river level was fairly high and we would have had to turn around only to find the other river crossing, so it’d have been an issue.

The Tawarau Falls itself, and furthermore the Double Falls later on where not that spectacular given the multitude of other waterfalls I’ve seen in this country already, yet it’s a pretty nice day trip and absolutely worth your while! The Double Falls track is a bit rougher, but still no problem for any person with a little bit of tramping/bush experience. Both waterfall offer some nice spots for a snack and/or lunch. If you decide to go to check it out for yourself: Enjoy!