As someone who calls hiking (NZ English: “tramping”, “New” English: “trekking”) a passion, I absolutely wanted to go to the majestic Fiordland in New Zealand’s South West and walk the Milford Track, supposedly one of the world’s finest tracks. The problem: You have to book it about one year in advance, no good if you haven’t got a clue where you will be in one month’s time. After all however, I got very lucky and booked the huts as well as transport about five days before the planned start. Read on if you love mountains with waterfalls coming down, rainforests in between and anything related to a stunning, rugged and pure natural landscape!

I can’t remember who told me, but I believe it was when we were sitting in a hostel in Dunedin – someone spread the news that a few slots on Milford Track had become available due to a rather big group of people who had cancelled their bookings. Immediately I went onto the DOC website, and it was true – half an hour later, I had booked a slot for everything on my name, including the 4-hour bus from Dunedin to Te Anau. Pro tip for the cost conscious: Do not book the bus from Te Anau to Te Anau Downs to catch your boat to the track, nor book the bus back from Milford Sound to Te Anau on your final day; hitchhike instead (when going to Te Anau Downs, plan your time accordingly so you don’t miss the boat!) and save the $74 (that was the price in 2014 – might be higher now)! Pro tip for well-equipped and experienced trampers/mountaineers: Skip the boat ride and instead include a one-day trip over Dore Pass to get to the track entrance without having to take the boat for $79 (again, might be more now) – but only if you know what you’re doing!

The boat takes about 90 minutes to take you to Glade Wharf, the start of the track. This is the shortest and easiest day, as you only walk for a mere one hour before arriving at the hut where you have to stay for the night – this is the only Great Walk where it’s not allowed to skip huts! Nothing out of the ordinary here, although you already get a first glimpse of the fantastic landscape that the Fiordland has to offer. The huts were in top condition when I did it – they belong to what I call “newer generation”, as opposed to the ones on the Lake Waikaremoana Great Walk, which are very dated. At Clinton Hut, the cooking/social area has a separate building, and the “sleeping” hut has 40 bunks, all in one big room which no separation walls (well, it has walls, but they don’t connect to the ceiling and there are no doors) – so bring your earplugs. Chances are that at least one out of 39 people will snore, and yes, it will be full during Great Walk Season.

On this first day, we had sunshine, a rare occurrence in Fiordland. The day is really just about getting there and enjoying the ride. Day 2 marks the “real” start; the last thing to mention is that we were certainly raising our eyebrows when the ranger told us that it would be raining during the night, and thus the track up to the pass next day would be flooded…possibly UP TO OUR CHEST. Yes, that does cause you to either quit your walk or get them to call a helicopter to proceed – that you will have to pay for.

Mist and light rain were awaiting us on the following morning. Given that there is more than 200 days a year of rain, there was no point moaning (the ranger had told us anyway) and I was actually a bit happy about this: I was told there’s hundred, if not even thousands of new waterfalls running down the rugged mountains, and this is not an exaggeration. At first though, everybody was concerned about the flooding. The ranger went out to check the track, and while I was having breakfast he reported back that the water stood barely up to our knees…oh well! After the first “crossing” I went full kiwi style by keeping my boots on rather than relying on my bare feet (in the future, I’ll have reef shoes for this – keeps the boots dry!). 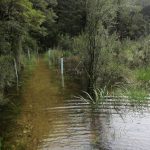 It could have been much worse, so be glad only your feet and legs get wet! 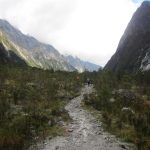 Except for day 3, most of the track is flat and suitable for inexperienced trampers too. 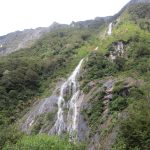 We soon escaped the wet inconvenience and reached the dry part of the track. While the track was following alongside the wild Clinton River, I and many other fellow hikers surely revered the water that was coming down left and right of us. The dry rivers you have to cross (these are flooded in Winter) are certainly another hint on how much more difficult this terrain would become in the cold season. Most of day two’s track is easy – it’s mostly flat and you hardly notice yourself gaining altitude, save for few parts. The weather even cleared up a bit for short periods, but not enough to see the Mackinnon Pass or the Pompolona Icefield that the official DOC guide is talking about. I stopped for a while at one of the two shelters, but if you like to eat AND be undisturbed, act swiftly: The sandflies didn’t take long to find us and are looking forward passionately to tramper’s blood.

I can’t quite remember Mintaro Hut except for the fact that this is a “standard” design DOC hut – albeit bigger than the backcountry ones – and that we all we longing for dry boots, which we desperately tried to dry around the hut’s chimney. That’s not a good idea by the way, as it will damage your boots; if you can afford the weight, carry some old newspaper with you, which is the easiest way to dry your boots (or replace this with water sandals/reef shows if you’re smart and don’t mind cold feet for a while!).

The alarm goes off, eyes open slowly – and there we are: The long awaited day 3, supposedly the best, was here. It certainly started well: Clouds, no rain, and a beautiful track in front of us. On this part, you can see what “cold rainforest” really mean. Lord of the Rings galore! The weather improved as we were ascending Mackinnon Pass, and we were just like: Are we really going to get a great view? We started between 7 and 8 am if I remember correctly, and as it turned out this was just a little too late for a truly epic view once we reached the pass saddle – there was a cloud hanging low over the valley that was our destination – but it was still a view to behold! The Fiordland in all its majesty, a Norway on the other side of the planet. Good on New Zealand for making this a huge National Park, and goon on the UN eventually becoming a UNESCO World Heritage Area. 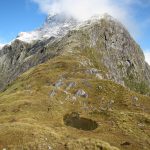 If you are up early and have an experienced party, you can go up there too 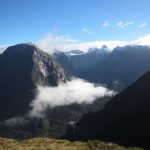 What a bugger that this single cloud is hovering there – still an amazing view though! 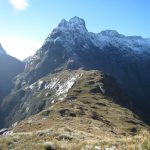 I had a long lunch break on the pass and actually turned left after coming up to see how far you can progress, and it seemed a little track would lead there. It turned out that you can climb Mt Hart (not 100 % if it’s that one), but a DOC sign makes clear that only experiences parties should undertake this, and that it would take several hours, meaning you have to arrive around 6 or 7 am at the pass! It would have been dangerous to proceed on my own, so I took the track down into the valley. While descending, one can admire the spectacular Roaring Burn River with its many pools and cascades. Especially interesting are the extremely smooth stone surfaces of certain rocks the water has been flowing over for centures – if this river would be bigger and the pools wider, you could make an awesome water slide out of it…not that anybody would want that. While descending, you’ll walk down stairs – an elderly Kiwi lady who told the group that she last walk the Milford Track in the 1970’s mentioned that there didn’t use to be any man-made structures, save for the huts, on this part of the track and that it was difficult and slippery to descent. Well, I won’t complain. It’s nice for people who don’t normally tramp to be able to do this track and possibly develop a liking for it. The Fiordland still offers other tracks for the more experienced! 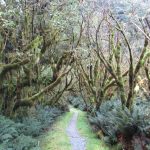 It could be straight out of Lord of the Rings, eh? 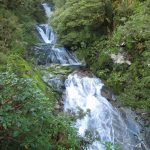 Water running down in cascades while you descend Mackinnon Pass 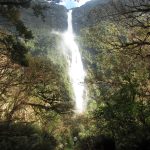 NZ’s highest waterfall at 580 metres – or second-highest, depending on how you measure

Arriving down in the valley, there’s a an option to do a side track to the Sutherland Falls, the highest waterfall in New Zealand. Don’t miss it, because it’s freakin’ awesome! The track leading to the falls is easy and quick, and when you’re still about 100 metres away, you already get the spray coming from the falls. Coming closer will give you an idea about the forces of falling water – the ranger recommended trying to get behind the falls for those who dare, I couldn’t make it as my hiking pants were water-resistant, not water-proof, and I couldn’t see anything due to the amount of water hitting your face, not to speak of that it’s very slippery around the rocks. But yeah, if you do the Milford Track, give this a go as well! The rest of day three is more cold rainforest and memories that will last you for a very long time.

All good things come to an end, eh? Day four offers more forest, an oddity (Bell Rock) and Mackay Falls, which are nice, but fade in comparison to the Sutherland Falls on the previous day. By day four I was fairly worn off (having packed too heavy once more) and getting motivated to reach the jetty at Milford Sound, with the very precise name “Sandfly Point”. The weather once more was cloudy/misty with a little rain, so when the boat arrived to pick us up to go to Milford Sound’s wharf, we didn’t get to see the postcard version of Mitre Peak, but we shipped passed it…all good! On this day you have to be at the jetty by your booked time, otherwise it’ll be a very expensive lesson. We were back around 2 pm and I took the bus back to Te Anau, which takes another two hours. Exhausted and happy, I returned to the hostel and fed myself.

Is it the “finest walk in the world”? Well, who knows, I assume there are equally pretty tracks elsewhere on this planet – particularly in Norway or possibly Patagonia –, now, all I can say is: It was worth the money and if you have the chance to do this track, do it, especially when you’re not into tramping otherwise. You will not regret it!